Circuit breakers turning off and going bad are both different things. When any problem happens with the circuit, you need to figure out its reason to know whether the circuit breaker has turned off or gone wrong.

You need to be very cautious while examining and replacing a circuit breaker. Figuring out the problem and solving it as soon as possible to avoid any danger is necessary.

How To Examine A Faulty Circuit Breaker?

Step by step, in this article, you can find out how to examine and what to do with a faulty circuit breaker. 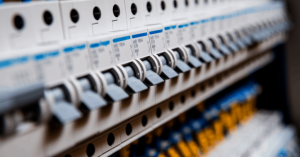 Furthermore, when a circuit breaker goes bad and needs to be replaced, it has different signs and needs to be adequately examined. If a circuit breaker trips, it doesn’t mean that it is not working correctly. It means either there is a short circuit, power surge, overload, or any other issue with the flow of electricity in the circuits. Some signs that tell that the breaker has gone bad are:

Breaker Does Not Stay On:

If a breaker has gone bad, it won’t function properly or repeatedly trip while you try to reset it because it can be a short circuit. Moreover, if you don’t know about electricity issues, call an electrician so that he can adequately examine the real reason behind it.

Furthermore, if a circuit breaker turns on when you reset it and is frequently tripping, it’s time to change the breaker. Still, you would need to let an electrician figure out the real issue by examining both externally and internally.

The Smell Coming Out Of The Breaker:

Carefully open the electrical panel and slightly touch the circuit breaker. If it feels hot to touch, then definitely it has gone bad and should be replaced with a new one.

Sometimes, other than the circuit breaker, any dimmer or switch of the connected appliance can also get hot. Consider this as one sign of any problem with the circuit or overload.

When you see any torn or melted wire and notice any damage marks on switches or any machine in the house, power it off with caution if you can or call the electrician immediately to prevent any harmful incident.
If the signs are due to a power surge or short circuit, it may be a sign of a malfunctioning circuit breaker because it didn’t control the flow of electricity to the appliances. 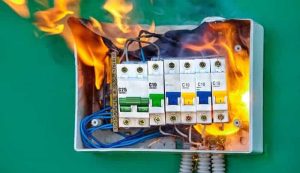 You can sense a nasty burning smell coming out of a circuit breaker, and it feels hot to touch. More prominently, you can see a torn wire or continuously blink any bulb powered by that circuit. You can use various devices to determine where exactly the heat is rising in the house.

Firstly, make sure whether the circuit breaker has gone wrong or there is any other problem linked with it, such as a short circuit, power surge, or overload, so that you can resolve the issue quickly. You don’t need to replace a circuit breaker if it hasn’t gone bad and is only tripping. Simply making specific changes with the use of electricity will be enough.

Why Does A Circuit Breaker Go Bad?

Finding out the reason behind the damaged circuit breaker is as essential as replacing it. Once you determine the cause, you can prevent the circuit breaker from going bad again in many ways. Although a circuit breaker can start to malfunction after an extended period, it can also occur due to any of the following issues.

The short circuit disrupts the normal flow of current in the circuits. When the circuit breaker turns off, you have to check and turn it back; otherwise, it stops protecting circuits from heavy current flow.

A circuit breaker can also stop working due to power surges. When the voltage of current to electronics in a house suddenly increases, it is called a power surge. A power surge can damage the circuit breakers, sometimes causing them to go bad.

Circuit breakers trip when there is an overload of voltage for a circuit. It does this to protect a circuit from a flow of current that is more than its capacity. Different circuits are designed with various capabilities. When there is a circuit overload, it means that there is more supply of current than the capacity of a circuit.

Moisture or water in grounded wires causes current to flow more than usual due to lower resistance that can be more than the capacity of a circuit. As a result, the breaker will trip and ground falls might cause a circuit breaker to fail.

What To Do With A Bad Circuit Breaker?

As a house or place owner, you should be careful about electric issues. When you find out that a circuit breaker has gone bad, take measures to change it as soon as possible. Otherwise, your electronics can get damaged easily and even cause disastrous problems.

Don’t try to change or repair a circuit yourself if you are not an electrician or know how to do the job. Contact an electrician and let him fix the problem or do as he says if he can’t reach on time in an emergency situation.

Can You Test A Circuit Breaker?

Electricians can test circuit breakers using various methods and devices designed for this purpose. These devices include a multimeter, voltmeter, electromagnetic circuit, electrostatic wand, and clamp ammeter. These devices should only be used by professionals who have knowledge of their usage.

So basically, yes, a breaker can go bad or malfunction instead of just turning off. To determine the proper functioning of the circuit breaker, we have mentioned some points above that would be helpful if you are facing any issue with the circuit breaker at your home.

However, it is always preferable to consult an electrician to replace or repair a problematic circuit breaker.

No comments to show.